Aral a once-large saltwater lake straddling the boundary between Kazakstan to the north and Uzbekistan to the south. The shallow Aral Sea was formerly the world's fourth largest body of inland water. It nestles in the climatically inhospitable heart of Central Asia, to the east of the Caspian Sea. The Aral Sea is of great interest and increasing concern to scientists because of the remarkable shrinkage of its area and volume in the second half of the 20th century. This change is due primarily to the diversion (for purposes of irrigation) of the riverine waters of the Syr Darya and Amu Darya, which discharge into the Aral Sea and are its main sources of inflowing water.

The sea's northern shore—high in some places, low in others—was indented by several large bays. The low-lying and irregular eastern shores were interrupted in the north by the huge delta of the Syr Darya and in the south were bordered by a wide tract of shallow water. The equally vast Amu Darya delta lay on the lake's southern shore, and along the lake's western periphery extended the almost unbroken eastern edge of the 820-foot- (250-metre-) high Ustyurt Plateau.

Shrinkage of the Aral Sea, 1960--99.From about 1960 the Aral Sea's water level was systematically and drastically reduced because of the diversion of water from the Amu Darya and Syr Darya rivers for purposes of agricultural irrigation. As the Soviet government converted large acreages of pastures or untilled lands in Uzbekistan, Kazakstan, Turkmenistan, and elsewhere into irrigated farmlands by using the waters of the Amu Darya and Syr Darya, the amount of water from these rivers that reached the Aral Sea dropped accordingly. By the 1980s, during the summer months, the two great rivers virtually dried up before they reached the lake. The Aral Sea began to quickly shrink because of the evaporation of its now-unreplenished waters.

By the late 1980s, the lake had lost more than half the volume of its water. The salt and mineral content of the lake rose drastically because of this, making the water unfit for drinking purposes and killing off the once-abundant supplies of sturgeon, carp, barbel, roach, and other fishes in the lake. The fishing industry along the Aral Sea was thus virtually destroyed. The ports of Aral in the northeast and Mŭynoq in the south were now many miles from the lake's shore. A partial depopulation of the areas along the lake's former shoreline ensued. The contraction of the Aral Sea also made the local climate noticeably harsher, with more extreme winter and summer temperatures.

By 1989 the Aral Sea had receded to form two separate parts, the "Greater Sea" in the south and the "Lesser Sea" in the north, each of which had a salinity almost triple that of the sea in the 1950s.
In the late 1990s an island in the Aral Sea, Vozrozhdenya, became the centre of environmental concern. This was of special concern because Vozrozhdenya had been a testing ground for Soviet biological weapons during the Cold War. In addition to testing done there on such agents as tularemia and the bubonic plague, hundreds of tons of live anthrax bacteria were buried on the island in the 1980s. In 1999 still-living anthrax spores were discovered on the site, and scientists feared that when the island was no longer surrounded by water, land vertebrates could carry anthrax to populated areas.

Other environmental problems plagued the region as well. By the end of the century the Aral had receded into three separate lakes. The level of the sea had dropped to 125 feet (36 metres) above sea level, and the water volume was reduced by 75 percent of what it had been in 1960. Almost no water from the Amu Darya and the Syr Darya reached the sea, and, unless drastic action were taken, it seemed likely that the Aral Sea could disappear within 20 to 30 years, leaving a large desert in its place. The health costs to people living in the area were beginning to emerge. Hardest hit were the Karakalpaks, who live in the southern portion of the region. Exposed seabeds led to dust storms that blew across the region, carrying a toxic dust contaminated with salt, fertilizer, and pesticides. Health problems occurred at unusually high rates—from throat cancers to anemia and kidney diseases. Infant mortality in the region was among the highest in the world. 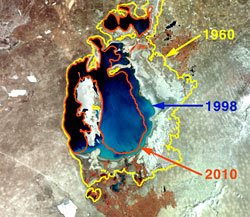 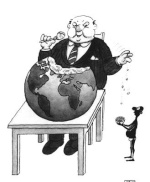